Lit review currently at 18 pages.
Goal for tonight: get up to between 20-22 pages.
Poss. goal for this weekend, or after comments from profs: get as high as 30 pages.

---
two more interviews with students, one tomorrow, one next tuesday.
---
observing the class tomorrow and monday, interviewing the teacher on monday.
---
this weekend i need to develop a survey/info sheet for the students to fill out, partly inspired by Prodroumo's (1992) survey of a couple hundred Greek EFL students re: what they want as far as cultural content. obviously mine will be on a way small scale. I'm hoping to gather a little more basic info that hasn't come up in our conversations and give them a chance to tell me anything else they might want. I'm hoping email will be useful for this as well, though some are more likely than others to want to continue the conversation. I'm trying to emphasize that they are welcome to respond in their own languages if they want but only one student has really taken me up on it in the interviews (a language i kinda speak, obv.).
---
one student who i'd originally hoped to include in the study hasn't been able to meet with me, and I'm disappointed that I won't be able to talk to her. I have a whole set of essays she wrote for a class last year and I'd love to do something with them, but my whole method kind of depends on interviews, so I'm not sure where to go.
---
Posted by Joel at 9:02 PM No comments:

1. All humans are individuals.

3. Social group membership and identity are multiple, contradictory, and dynamic.

5. Methods of studying cultural knowledge and behavior are unlikely to fit a positivist paradigm.

6. Language (learning and teaching) and culture are mutually implicated, but culture is multiple and complex. 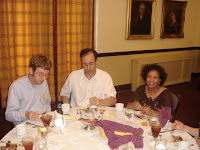 This comes from the JSLW Symposium 2006, which I promised to write about on this website but as yet have not.
Posted by Joel at 10:25 PM 3 comments:

I'm not sure how much general ESL stuff I want to include as opposed to L2-writing-specific stuff.
---

Did another interview today with a student who is leaving to be with her husband in the midwest. really glad i met her and included her in the study - she has had so much to say about culture and the writing process. she often used the phrase "it's a cultural thing" in her answers to my questions and today in one response she said "it's a multicultural thing," which i liked and thought was somewhat telling - although the idea of constructing a multicultural identity doesn't appear anywhere in her essays, it's definitely there when I talk to her; does this suggest that maybe the "Traditional" assignment about culture doesn't leave much room for writers to identify themselves as multicultural or to situate themselves within multiple cultures? maybe.

she speaks about taking the "best" from American culture but not the bad parts as she sees them. Her essay on culture seemed somewhat deterministic, so I asked her a little about how/whether she sees herself as having a unique identity or 'self.' She quickly mentioned she often wanted to do things seen as "strange" or "odd" by her peers/cultural norms. I asked her where she thought that came from and she said "maybe from God." I liked that a lot.

i don't have any "gen 1.5" students in the study, but they do have a wide variety of reasons for being here and plans to stay or not. one is married to an American and plans to stay "forever," one has parents who own a business in the US and he says he wants to stay in the US "maybe forever," one has a BA from a university in her home country but is going for another in a US university. Only one of the students plans to head straight back after his studies - i think because he has a job to go back to.

conventional wisdom suggests that it's those who immigrated as young children whom we have to be careful about when it comes to inappropriate cultural orientations (Harklau 1999) - treating them as newcomers and all but forcing them to write about countries that aren't "theirs" in any meaningful sense - but there is as much variation in relationship to the target culture, I think, among "traditional" ESL students. they may be relative newcomers, but they are actively "learning culture" and developing hybridized cultural identities.
Posted by Joel at 10:59 PM No comments:

How do ESL writers write about their own culture?

Why do they decide to represent their own culture(s) in the ways they do?

What do ESL writers think about the concept of culture?

Do students in ESL writing classes think cultural topics are appropriate content for their texts? Which ones? If not, what do they want?

How does culture "work" as content in an ESL writing course?

"That is not true"

Yesterday during an interview for my masters project, one of the students I'm interviewing said something about writing in a second language that kind of blew my mind:

Me: If I write in English, I can feel very confident that I am really expressing myself, that this is me, this is who I am. But if I try to write in Spanish, I almost feel like this isn't really...
Her: It's not true. That is not true. You don't feel that is true.
...
Me: when you turn in your assignment to (your teacher), it's almost like, are you turning in something that...
Her: it's not true for me.
Posted by Joel at 11:48 AM 3 comments: