One thing that some applied linguistics textbooks recommend is taking a language class before or while you teach one, to help you to empathize with your students and to get some insight into the language learning process. I think this is a great idea, although I haven't taken a language class since one quarter of college Spanish that I barely even remember attending. (I took Spanish in high school.)

On the language/culture tip, though, I must say there is nothing quite like actually being in a foreign country to help with the whole "empathy" thing. I swore I'd be above all the China cliches, that I wouldn't write about the same stuff that everyone seems to, that I was better prepared. But the reason people write about that stuff is: it's in your face, all the time. When I go out in public, I am painfully aware that I am often the only non-Chinese, non-Chinese-speaking person within, say, a one-mile radius (probably more - though it usually feels like I am the only one in the world). I know that this country being what it is, "foreigners" are more of a novelty, more notable (we don't really have much of a concept of "foreigner" in the US nowadays), but I will say that I have a whole lot more respect and admiration for the "foreign" English language students I worked with in the U.S. Being a foreigner is hard work.
Posted by Joel at 4:48 AM No comments:

Advice from Paul Matsuda's blog, which strikes me as an awfully sane thing for a professor to write:

If you feel like you are sacrificing something else when you read and write in your field, entering a Ph.D. program may not be the right career decision. If you have that much discipline to complete the degree requirements without really enjoying the process, you might consider choosing from many other career options out there that don't require a Ph.D. and that you might actually enjoy.
Posted by Joel at 11:03 AM No comments: 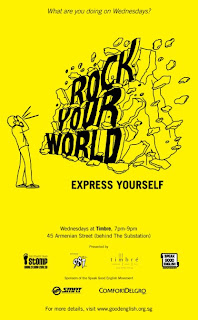 One small irony of Singapore's Speak Good English movement is that for most Americans, the phrase "Speak Good English" would probably be treated with suspicion as potentially ungrammatical, thanks to the same instinct that makes us think we should say "I feel badly" instead of "I feel bad."

Even I, non-prescriptive-grammarian that I am, have to pause.

You have to wonder what they really mean, though. "Speak Good English," in Singapore, I imagine, is code for "don't speak Singapore English." Which some would go so far as to say is code for "don't express your identity in the way you feel most comfortable." I'm not sure I'd say that. But when the name of the movement makes a "native speaker" like me trip up, you gotta wonder what's going on ah.
Posted by Joel at 2:37 PM No comments: