Learning the Wrong Lesson from the Tower of Babel

The Tower of Babel is an endlessly fruitful metaphor for linguists, and it's showing up in current books like Michael Erard's Babel No More (which I recently won a free copy of somehow), Nicolas Ostler's The Last Lingua Franca: English Until the Return of Babel, and Dan Everett's Language: the Cultural Tool.

Regardless of who's referencing it and for what purpose -- and whether in a religious or secular context -- usually the implication is that it's a drag that we don't all speak the same language, because if we did, it would be better and easier and we'd understand each other. (Think of Douglas Adams' babelfish, a creature that instantly translates from any language to any language.)

This is the wrong lesson to take from Babel -- wrong in the religious sense, and simply wrong in the sense that it  misunderstands what language is and how it works.

To briefly sum up why this is the case, I'd like to quote from Mingyan Hong's excellent dissertation "Spirituality and SLA" (Second Language Acquisition):


Many Christians cite the Babel story as clear evidence that ... that the diversity of languages is not to be celebrated, but should rather be mourned or tolerated while waiting in hope for a promised future restoration of unity.


This in fact is not the point, she argues. Hong goes on to interview Suresh Canagarajah (a thinker whose implications for a Christian understanding of language really need to be further explored), who adds:


...this is what I see as a sign of the Tower of Babel, eliminating diversity in order to become one against God. And God punished them. The lesson is against monolingualism, or even monoculturalism, reducing the diversity of humanity by becoming one people with a single language, culture, etc.


The point, then, is that the divine mandate for human flourishing is for diversity and difference, not singularity. And indeed, most of us accept the weak form of linguistic relativity -- that linguistic (to say nothing of cultural) differences allow for different perspectives, ways of expressing things, etc. And really, if you get into social constructionism, it's our use of language that in large part creates the world(s) we live in. If we abide by that theory, a single language describing a single reality is nearly impossible. (That assertion has its own epistemological and theological controversies which would need to be sorted out.)

Also, Babel is linked with Pentecost, which is really interesting in that it is an affirmation of multilingualism (because everyone is using his own language) but it also claims that everyone understands what is being said equally. It would be worth exploring that.

From a 1935 issue of the Journal of the American Dialect Society. 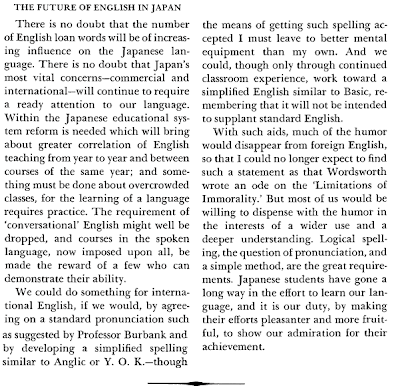 Also of note, a related issue some 75 years later: the somewhat dramatically titled "Fall of the Japanese Language in the Age of English".
Posted by Joel at 5:54 PM No comments: