I've been doing a lot of thinking about the place of "Chineseness" in the linguistic/cultural landscape of Vancouver/BC/Canada. In 2010 my friend Ai Mizuta and I did a presentation at IAWE about the "Chinese/English Interface" in Vancouver; I still see this as an important and interesting issue but I think it needs to be expanded to include language ideology and language policy at both the macro and micro level. I've been trying to develop a hypothesis about the place of Chinese linguistic (and indeed cultural) literacy in this geographical area but every time I try to say it in a short sentence I get tripped up. 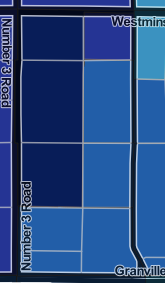 There's a sense in which Chinese lx/cultural literacy is "underground" in Vancouver, but it's hard to see Chinese as a 'minority' language in some ways. For example, 76% of people who live smack dab in the middle of Richmond speak Chinese as their primary language (the three blocks between Granville St and Westminster highway next to #3 road). I think the total number of people in BC who speak a Chinese language is close to 30% of the total population (compared to around 1% French? These are old and maybe mis-remembered numbers). Yet Chinese-language businesses tend to be described in the mainstream media as having an air of, I don't know, "secrecy" about them? Like almost literally going back to the turn-of-the-century racist caricatures about Chinese "inscrutability?"

It is true that multiple Chinese-language Uber-like ride-hailing services, which are illegal in BC, seem to be currently running here. It's also true that Chinese-language para-educational companies that provide services many faculty members and administrators would view as somehow unethical operate, and my sense is that they operate in part because the mainstream view in Vancouver is that Chinese doesn't exist.

I don't mean it literally doesn't exist. I mean that it is something that is assumed not to actually be a part of our (un/)official shared discursive world; this is in part because of Canadian language policy, which enshrines only two languages (French and English) as official, but it's also in part because of a long history of straight-up racism and marginalization of Chinese people since the founding of this province.

I think about the Chinese-language linguistic landscape of the campus where I work -- advertisements for education, food delivery, events, etc. -- and I wonder what other domains we see Chinese being prominent in here. Real estate, certainly, but really you can find it almost anywhere. I live in one of the "whitest" neighbourhoods in Vancouver (allegedly) and I can see Chinese-language signs from where I sit in this cafe. There are four or five businesses with Chinese-language signage on my block alone. This is to say nothing of the ongoing and often bizarre "Chinese sign controversy" in Richmond which has resulted in a city bylaw "encouraging" but not enforcing all signs to include at least "50% English." This is an issue that will apparently not die, as its champion is now running for city council in Richmond. [UPDATE: She lost.] I don't live in Richmond, but the way that this stuff gets talked about in online news comments (forgive me for reading them) strikes me as stomach-turningly racist and xenophobic.

This doesn't mean that these things shouldn't be studied, though; in fact it probably means the opposite.

What methodological tools are useful, I wonder, for a study that would look into both the empirical "status" of the Chinese language vis-a-vis English and other languages in this urban linguistic landscape, but that would also account for the ideological marginalization of the language and its speakers vis-a-vis English and other languages? I get the sense that due to the political situation it is inevitable that Chinese exist in some kind of dynamic relationship with English here. I don't know how to go about studying or explaining this, though.