From a 2012 study at Waterloo University (https://www.uwo.ca/tsc/resources/publications/newsletter/selected_articles/academic_integrity_survey1.html)


From, I believe, a 2002 study in the US and Canada - I don't know if this one is prevalence or seriousness - I assume seriousness. (http://www.sfu.ca/integritytaskforce/donmccabe_slides.pdf): 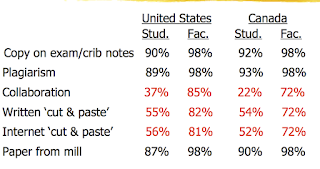 By far the trickiest thing here is writing. Faculty think that "copying sentence from the internet without citing" happens WAY more than students do, like almost 3 times more. Similarly, the McCabe study treats plagiarism, "cut and paste," and paper from mill differently, but I have a feeling many students and faculty would have different understandings and definitions of these things.

My informal surveys of first year-students, local and international, overwhelmingly get this answer:
" I don't really see much cheating and it's not a big deal."

My conversations with faculty members overwhelmingly get this response:
"cheating is rampant, especially among international students."


Is this a clear case of right and wrong? Different interpretations of the same phenomena? Competing discourse worlds? 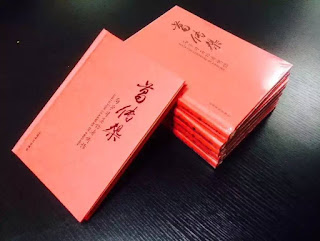 This is huge! A pioneer of English education in China during the republican period and beyond, Ge is best known for his Chinese-English dictionary, which is still in print, his textbook The Writing of English (英语写作), and to contemporary scholars probably for his coining of the term "China English" in 1980. He died in 1992.

I hadn't checked for a while but I just googled him and found that a Shanghai publisher has  in the last few years issued, as best as I can discern, three volumes of his work. (Check Amazon.cn here, for example.) These appear to be collected essays, some of them originally collected in books in the 1930s-40s (?).

The picture is from this blog which sheds a little light on the subject, though it's mostly in Chinese.

What interests me most about Ge is what we can learn about the history of the discourse of English in China from him. I don't mean to imply that if we can discern his ideology, methodology, etc of English education we can prove that for sure that's what China was all about in the 1930s, it could at least be one source of triangulation. (If triangulation is even a thing in what I will now audaciously refer to as "historical applied linguistics," a phrase I do not see used very often if at all.)

What little I know about his work is intriguing, though; at the very least, his work and its prominence suggest certain things like:

This just scratches the surface, of course. I need to get my hands on these books, and as soon as I can figure out how, I will order them shipped here to Canada posthaste.

Cut and pasted below is a letter purportedly from the venerable British lexicographer H.W. Fowler, a month before he died, to Ge (or as he was somewhat unsually known, "Hertz C.K. Ke"). I don't know much about its veracity, but it's often said of Ge that he wrote to Fowler to correct alleged mistakes in Fowler's work. The first two sentences seem to me to say so much about the state of English in the world, and in China, both in 1933 and now:

I find no difficulty in believing that you will attain, if you have not already attained, your ambition of writing English as no other Chinese can; for your letter is in faultless English, and, long as it is, nowhere betrays, as nearly all foreigners' letters do by some trifling lapse in idiom, that its writer is not an Englishman.

I often say this, and sometimes it is not true, but: more on this later.

Dear Sir,
I find no difficulty in believing that you will attain, if you have not already attained,your ambition of writing English as no other Chinese can; for your letter is in faultless English, and, long as it is, nowhere betrays, as nearly all foreigners' letters do by some trifling lapse in idiom, that its writer is not an Englishman. I receive many letters in English from foreigners, but do not remember ever having had occasion to say this before. If this statement can serve you in anyway, you are free to make use of it.

Your comments upon points in The King's English are all acute and pertinent, and I am greatly accepting the corrections of misprints and wrong references that are among them. The wrong reference are due to the change of paging for the third edition; I corrected many such, but some escaped me.

I have read all your criticisms with care, and find that I should be ready to defend what we wrote in all, or nearly all, cases; but I regret that, owing to pressure of work, old age (75), and failing eye-sight, I cannot comply with your request for explanations, or argument -- except for one or two general remarks. Many of your criticisms turn on the fact that advice given in M.E.U is not acted upon in K. E. Well, K. E was written some 20 years earlier, and M.E.U represents my later views and is to be taken as superseding the earlier book where the two books differ; It was hardly possible to bring K.E into conformity on points where what is laid down in M.E.U is merely advisory and suggests reforms that are still far from general acceptance. It is not to be expected that views should undergo no change in 20 years, but only that the later ones should be the result of careful consideration. But you remarks show the care with which you have read the two books, and I accept the compliment with much pleasure.