A Day in the PhD Life 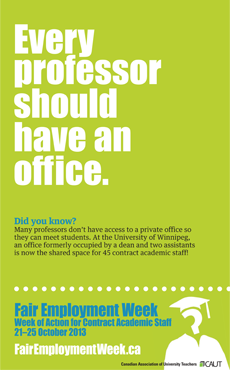 I make pretty good money as a sessional at UBC compared to what some people at smaller institutions (and especially in the USA) make. But I'm concerned at the huge disparity between tenure-track professors and adjunct/sessional instructors in North America. Adjuncts do more teaching, make less money, and have to hustle every 4 months to make sure we'll have jobs.

I just finally looked at my teaching evaluations from the summer. They are so much better than the ones I got 3 years ago when I first taught in the TESL certificate program. I guess I am actually getting better at teaching.

I won't toot my own horn too much but will paste one here.

"This instructor is passionate and knowledgeable about the subject, has a friendly teaching manner and is very approachable and flexible. He also had a sense of humour about himself, which helped to relax the class. I quite enjoyed this experience and I think I learned a lot about the basic principles/concepts of linguistics and how I could apply them to teaching. I had a couple of eye-opening realizations in this course, too, which were not just due to what I read, but to how the instructor presented it and discussed it."
Posted by Joel at 11:58 AM No comments:

Still pushing back against the expanding circle in World Englishes, our hero has an epiphany

"to academic language without personal engagement... is to mimic not to speak" - Canagarajah


(Furthermore the term 'performance variety' is troubling from a number of perspectives, especially if you accept (not that I do) that everything is 'performance' in a sense)
Posted by Joel at 3:33 PM No comments:

"...we have to ask if the term monolingual has anything more than an academic and ideological significance." - Canagarajah 2012.


Am I wrong to identify as monolingual? I spent the first 15 years of my life completely immersed in English, with foreign languages in tiny snippets for interesting diversions. I studied Spanish as an academic subject in high school and somehow got through my entire 10+ years of higher education with only one semester of Spanish. I did live and work in a Chinese-language environment for 2 years and greatly increased my knowledge of another language at that time -- but I simply do not see my background has having been anything other than monolingual.

Will think more about this. I think monolingualism has some interesting analagous paralellels to the idea of whiteness (plus they are often connected in tacit -- or blunt -- English-Only-ism). This could be interesting to explore someday.
Posted by Joel at 3:09 PM No comments:

Deconstruction is nourished by a dream of the invention of the other, of something to come, something absolutely unique and idiomatic, the invention, the in-coming, of an absolute surprise.


So writes John Caputo in his introduction to deconstruction. I am increasingly interested in how applied linguistics deals with (language) difference, and I feel like I want to enlist a kind of postmodern/postliberal theological/theoretical approach -- but I am also keenly aware that the ‘post-modern’ philosophical language of the 20th century feels obscure and ugly to people who don’t speak it natively. And frankly, I don’t. (In fact, no one does -- all academic language is a ‘second language’ really.)

Derrida, says Caputo, is a champion of philosophy but doesn't want to see it limited to philosophy departments, wants to give everyone the ‘right’ to do philosophy. I suppose we have embraced this right, which is why “theory” (which is really just philosophy, no?) is so important in the humanities and the social sciences. Interdisciplinarity and the ‘in-coming’ of ultimate questions to ‘practical’ fields like applied linguistics should probably be welcome.

I am hoping that framing my own dissertation (at least in my mind, or in a kind of personal ‘mission statement’ that will set my own theoretical agenda for a while) as a small part of this project to (a) understand and (b) theorize the reality of language difference will make me a little more enthusiastic about the minutiae I am actually involved in with my data.

[I just had a frightening thought that I might want to take a super postmodern/deconstructionist approach to data analysis. I don’t think I do. We’ll see. I’m not really interested in Derrida for his methods -- more for (what I take to be) his theory. More on this soon.]

I say ‘language difference,’ but actually another big piece of the puzzle is advocating a sociolinguistic approach to writing. Lillis’ book has been slow going for me so far, because despite its very clear first chapter, I have had trouble following a thread (I’m about halfway through) that makes strong connections between a sociolinguistic imagination (my words) and studies of writing. She’s right that new literacy studies and a host of other recent approaches certainly take all literacy as a social practice, but I'm not sure that is sociolinguistics (again, I know the term is getting muddied, and that is probably OK).

I suppose in the end I want to see a “socially realistic linguistics” (is that Labov?) that embraces both attitude/ideology and usage (as I've said before, I see this connection as a strength of the Kachruvian world Englishes approach) put to use in service of understanding language difference and how we deal with it -- especially in writing, which has been neglected as authentic/everyday language use -- and I want ultimately to do this kind of work under a theoretical umbrella that embraces some old-fashioned virtues/values, most notably charity. Alan Jacobs' discussion of Bakhtin in the context of charitable literary interpretation is probably relevant here, and if I can say this without being obnoxious, it certainly fits my narrative of "Literature has lots of good thinking in it, but I got out of literature because I wanted to apply myself to real-world problems."

It has taken me a long time to get to a place where I can articulate this. Three or four years ago I tried to write something in a text file that connected my values or faith or whatever to my research interests, and I just ended up writing a page about my research and at the end I was like oh yeah, and also I believe  some things about God and humanity. But now I feel like I'm getting somewhere with how I think about these things.
Posted by Joel at 9:49 AM No comments: