Questionnaires and Interviews as Communicative Events

I get that an interview is a piece of discourse in and of itself that's worth being analyzed as such (that is, not only for mining data from the interviewee's responses). What the interviewer says is bound to help produce what the interviewee says and vice versa. Looking into this is a good way of finding something out about whatever construct you're studying.

Questionnaires are a kind of interaction, too, though, no? The writer's audience is always a fiction, and a questionnaire is a piece of writing* so the writer of the questions is already making certain responses possible/impossible.

(* Maybe I am wrong about this, but I tend to think that anything that has, like, words in it, orthographically, is writing. I was pretty surprised to run into a linguist last year who told me that blogging wasn't writing. What else is it?)
Posted by Joel at 9:12 PM No comments:

On the (Non-)Integration of (L2) Composition and World Englishes

Why haven't we seen more integration of what I've been calling a "world Englishes perspective" in the field of Second Language Writing?

TIME OUT: I do think that "world Englishes perspective" is a legit term. Why "world Englishes?" I do realize that it alienates ELF scholars, and it simplifies a bit much -- it emphasizes the Kachruvian origin of the pluricentricity of English, but also implies being limited to Kachru's concerns. I could be persuaded by Saraceni to adopt "English in the World," but world Englishes feels a bit simpler at this point. Why "perspective?" Because as much as it may be taken for granted by (socio/applied) linguists and other social scientists, and some teachers, the idea that multiple legitimate varieties of English exist, are worth knowing/using, etc, is not a mainstream idea. Therefore, even though it's not exactly a whole new take on what Language is or what English is or whatever, I feel like taking Kachruvian ideas for granted does indeed constitute a perspective. OK, time in.

I think there are two reasons WEs hasn't caught on in L2 writing:

1) There simply are not many studies of the implications of WEs for teaching English as a language. (Please school me if I am wrong.) There are plenty of conceptual papers advocating a general orientation to WEs in pedagogy -- a call for a "paradigm shift" -- , but I'm not aware of many studies that empirically investigate what it means to teach Indian English, for example -- a Google Scholar search reveals six articles. ("Teaching American English" give 328.)

2) L2 writing is already fraught with problems regarding cultural variation in writing -- that is, contrastive rhetoric, or the newer intercultural rhetoric. WEs in writing style is covers virtually identical territory as CR (though with a decidedly different motivation and historical impetus).


I do think (and yes, I am totally CARS here) that zooming in on the sentence level -- the grammar stuff, the stuff we supposedly don't care about but that most people actually really care about vis-a-vis 'good writing' -- opens up a place for world Englishes to mesh with L2 writing studies. I realize it is not particularly fashionable to talk about describing particular English varieties now (since it's all 'hybridity' these days, and there's some truth to that), but the fact remains that in nearly every context, there is a syntagm (I prefer to call it an 'orbit') of meanings floating around ideas like "good writing" and "standard English" and so on. And grammar -- lexis and syntax -- plays a big part there.

Once again I think of the "can able to" example, from Canagarajah via Min-Zhan Lu's 1994 article "Professing Multiculturalism." Of course, you don't even have to look that far -- any time you (I?) make fun of somebody for using the wrong word, every time a bookworm chastises you for saying "I feel badly," every time you get into a quandary about whether to use "who" or "whom," you're playing out grammatical drama of What Is Acceptable, Legitimate Language Use -- and, more often than not, whether people are educated, worth listening to, etc.

Simply put, grammatical variation plays a huge role in everyday language users' (and teachers' and students') notions of what English is, what is acceptable in academic writing (or professional writing, or creative writing). If these variations are said to exist, they are worth investigating in any context -- as are people's attitudes toward them.

PS:  I am starting to wonder whether I have subconsciously started moving this way in my research due to a kind of grammatical guilt for having been my whole life the kind of person who cannot physically stop himself from correcting someone for making grammar errors. (It makes me a good proofreader, I guess.) Whatever the reason, it's kind of funny to note that I'm moving into an area I've kind of always been in, one way or another.
Posted by Joel at 9:04 PM No comments:

Finally Getting Somewhere with Methods

"Just focus on how best to design, analyze and integrate questionnaire and interview data--and why one would want to do that--in language education research—and what is missed if only one type of data collection is used, for example."  (Duff, personal communication)


Less philosophizing, more working towards my own actual research design!
Posted by Joel at 5:18 PM No comments: 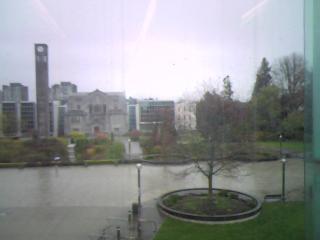 A university campus with no students on it
is a beautiful thing
but to read and to write well
is a daily struggle.
Posted by Joel at 10:23 AM No comments: