The Interface Between Chinese & English

"English and Chinese constitute two of the most powerful language complexes on earth and it seems highly likely that their influence on one another in future will transcend anything that has so far transpired between them."


"At a time when the PRC is moving towards full membership of the World Trade Organisation and the further opening of trade and other contacts with the world (including the 2008 Beijing Olympics), much more might be said about the possible futures of Chinese Englishes. That however would be the subject of another study, one which would deal with the contemporary and unfolding story of the continuing 'interface' between the world's largest two language cultures, both in China and throughout diasporic Chinese communities worldwide."

"I am grateful to Professor Tom McArthur for suggesting the use of the term 'Chinese-English interface' to refer to the complex cultural and linguistic interactions between the Chinese languages and World Englishes at a seminar on this topic at the University of Hong Kong in March 2000."


“ [McArthur’s] idea was that English and Chinese are  both world languages, and are  both pluricentric languages, and that these languages are in contact in various places worldwide – in Hong Kong, China, Singapore, Taiwan, but also, in the Chinese immigrant communities of Europe and North America. And that this contact is significant for the development of world languages, and for the development of both languages, not least modern Chinese which has been influenced by European languages in many ways over the last 200 years or so.”
– Bolton, personal communication

Goss, Zhang, & Lantolf (1994) were actually the first to use a discourse analysis approach to AJTs. Here's what they say about characterizing the participants' judgments (their tasks were done in groups):

"...we need some criterion to differentiate between talk that reveals evidence of judgments based on genuine linguistic intuitions and talk that points to some other source, such as memorized rules or L1 translations, underlying the judgments."

[Personally I don't care especially about that difference at this point, but I do want some kind of taxonomy along these lines.]

"At the moment we believe that talk that cites rules, pedagogical or otherwise and accurate or not, the source of which may be an instructor or textbok, or that involves translations into the native language, is indicative of judgments based on something other than real linguistic intuitions."

[Again, leaving aside the question of determining 'real linguistic intuitions,' this starts to suggest a way to categorize.]

"On the other hand, talk characterized by the absence of rules, by remarks like It sounds right, or a difficulty on the part of respondents in putting what they know into words, we construe as evidence that abstract linguistic competence of some type underlies the judgments."

[This is good stuff for the interviews, definitely, when participants are asked to explain their judgments.]

Higgins (2003) and Rubdy et al (2007 & 2008) look for evidence of ownership:
"...not just indigenization in which speaker appropriate English for their own needs but the degree to which speakers 'project themselves as legitimate speakers with authority over the language.' (Higgins)

Higgins uses some ideas from Erving Goffman, of all people, to get at that. Between the three studies there are 5 things they look for in the data:

1. references of legitimization (appeal to external authority)
2. Use of pronouns ('you' or 'I' (or we?) rather than 'it's wrong)
3. modality indicators (what you can, can't, should use)
4. References to the speaker's own English usage
5. References to intuition / not being able to explain

So, all together now, based on this and what I recollect from the data I've seen in my own study so far

2. Use of pronouns
a. "You say" (indexes authority - I tell you what to say)
b. "We say" (indexes membership in community of expert English-knowers)
c. "I say" (asserts individual authority as an expert English-knower)
d. "They say" (if referring to a preferred usage, a reference to expert/NS use; if referring to a dispreferred usage, a reference to learners or people who don't know English well)

3. modality (can, should, may, etc -- could analyse based on 'strength?') + how it is modified (definitely, etc) - not quite sure how to classify these.

4. References to the speakers' own English usage/knowledge (broaden, include S usage as in 2d?)
a. "I would say" (similar to 2c or 3, I suppose)
b. References to what is taught (I/we teach them to do X)
c. probably some other stuff...?

5. References to intuition - more for the interview, but could be things like:
a. feels, seems, etc (suggests strong intuitive sense of language?)
b. Vague/ambiguous adjectives ('this seems weird')

6. Teacher stuff
a. Simple "this is wrong" stuff. (also 'this is Chinglish') - could specifically mention an error
b. correction without mentioning anything else (could include modals)

What Linguistic Features of CE have been 'claimed' in the Literature?

It's easy to complain that most people are operating with an unclear definition of Chinese English, but what have people actually claimed in the literature as empirical features of CE? Leaving aside discourse, which is a big one in itself, here's what I'm seeing.

Not a lot out there done from a WEs perspective, but we could probably get something from CR if we wanted. Xu offers:

1. Adjacent default tense (yesterday I write a letter)
2. Null subject/object utterances (sometimes just play basketball)
3. Co-occurrence of connective pairs (because I X, so I Y)
4. subject pronoun copying (my mother she..., the building it...)
5. yes-no response (you don't like sports? yeah (i don't))
6. topic-comment (Cigars, the president never smokes them; Beijing...there are many old buildings)
7. unmarked OSV(other jobs I want to try; both languages I can't speak well)
8. inversion in subordinate finite wh-clauses (I don't know what should I learn)

9. Nominalization (there are a lot of specific things here that I need to take more time to read)
10. Multiple-coordinate construction (done with 'Chinese pragmatic motivations') (p. 92 - not unique to CE, but still a feature of CE for cultural/pragmatic reasons -- like 'the three represents)
11. Modifying-modified sequence (preference for forward-linking, subordinate clauses first)
12. Use of imperatives (in Ha Jin -- doesn't seem that unique to me, but he makes a good argument on p 102)
13. Tag variation (varying tag Qs, like Chinese)

Think-Aloud Data Analysis: "Open" vs "On"

6 commenters point out that "open" is not the 'right' word to use here. Other suggestions are "on," "set," "turned on," etc.

So: what kind of situation is this?

You can call it a 'direct translation' error, assuming the student is "thinking in Chinese" where 关 means both open (like a door) and turn on (like a light or appliance). So he incorrectly translated guan - he picked the wrong meaning. (But maybe he didn't know that it can be translated as 'turn on' at all.)

Similarly, you could call it 'interlanguage' or 'interference' from Chinese, both of which would also refer to the situation above.

If you didn't want to think about it from an SLA perspective, you could call it a 'word choice' or even 'collocation' error -- any time you write, you can pick whatever word comes next, and in standard English we wouldn't expect an alarm clock to be 'open' but we would expect it to be 'on.' It's not necessarily directly because of Chinese. (It probably is, though, but you can't always prove that. Plus, other NNESs might use it.)

We could go so far as to call it a 'variation,' (that is, a legitimate dialectal difference from standard English) because it seems to be attested that open/close for things like lights is pretty widely used by NNESs. (I know some people who use it.) (see this Google search.)

I guess the most likely (I want to be careful about ascribing intent to the writer) is the 'direct translation' scenario. The commenters are more generally calling it a 'wrong word choice,' and I'm personally sympathetic to calling it a variation. Who's right? 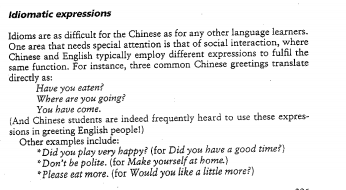 This is an example of the kind of comparison between Chinese English and "English English" that makes me crazy. (NB, this is not written from a world Es perspective -- clearly the author is doing a kind of contrastive analysis and pointing out difficulties or mistakes learners have -- elsewhere in the passage there's pronunciation, vocab, etc.)

I don't mean to be mean to the original author -- I get what they're trying to do. It's meant to be helpful. But from my perspective, it just isn't.

Seeing an asterisk in front of a phrase that is simply not idiomatic in "English English" (note another phrase here I've always been a little weirded out by -- "English people") doesn't seem right. The * is used in linguistics to designate an ungrammatical sentence, or in language learning texts to designate an error. "Please eat more" is not an "error." In fact, it is not just not an error, it's something you could very well hear in a conversation between "English people."

It's not that I don't understand that some of these are uniquely Chinese phrases -- but for the asterisked ones especially, I just don't see any benefit in telling a student not to use them, other than helping them to become some imaginary version of an English Person.

In conclusion*, some corpus linguistics work might really come in handy in reshaping the way we think about this kind of stuff.

UPDATE: Shamefully I note no instances of "don't be polite" or "please eat more" in the British National Corpus. But the limits of what we have already observed does not preclude the existence of the reasonably plausible utterance, right? (Right?)

* PS: I usually use "in conclusion" ironically, to introduce something that is basically a non sequitur. FYI.
Posted by Joel at 11:13 PM No comments:

New rule: don't look at your evaluations until you've taught another (different) course.

Every time I look at my evals I get depressed for several days. I know that they're supposed to be constructive criticism, that they're actually not that bad (really only a few negative comments), that people who have something negative to say are more likely to do the evaluations (only half my class did them), and that people who get lower grades give lower evaluations, but I still end up feeling like I am not only a bad teacher but a bad person. It just makes me feel awful -- and I just glanced at the comments.

I do know I have a lot to work on as a teacher -- I'm pretty disorganized (getting better) and when I give an assignment for the first time I tend to make the instructions vague (getting better at this too).

But I've got to quit reading the comments right when they're emailed to me.
Posted by Joel at 9:53 PM 1 comment: